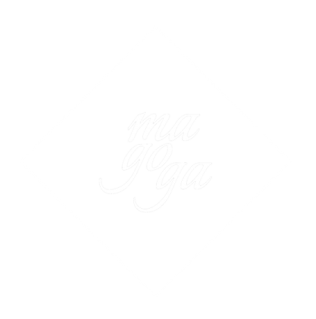 The flavor of Cartagena

From its origins as a restaurant in 2014, to today as a gastronomic restaurant, the essence of Magoga has always been the same: “that everyone who enters through its doors knows that they are in Cartagena”.

María Gómez and Adrián de Marcos have set out to recover that millenary legacy of flavors and techniques that the passage of time has blurred to raise it to the culinary level it deserves.

Through history, childhood memories and the traditional recipes of their grandparents, they invite us to rediscover the culinary roots of the city in a delicate game that brings together past and present.

Their determination has led them to rescue recipes such as scombrum, the purest version of the garum sauce so appreciated by the ancient Romans. Or to vindicate the potential of such humble ingredients as carob, which they use to make the chocolate for their delicious petit fours.

In a menu that evolves with each season, there is never a lack of classics such as cured salted fish presented on a plate in the shape of the submarine of the Cartagena-born Isaac Peral.

At Magoga, every dish, every mouthful, is a journey through the history of Cartagena, its landscapes and its people. 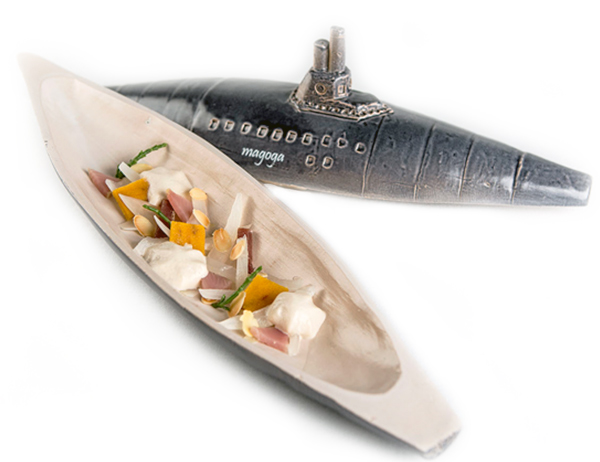 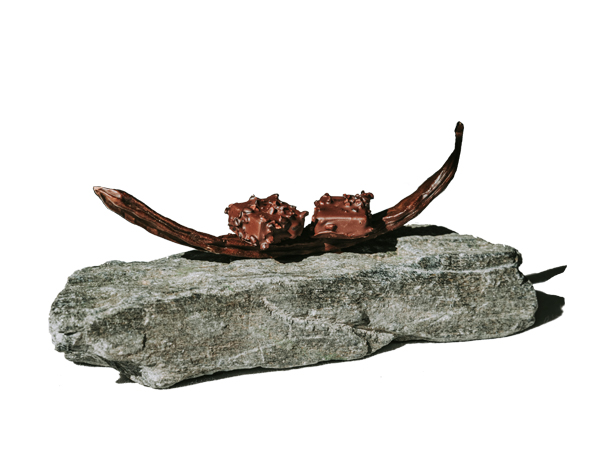 HARMONY BETWEEN KITCHEN AND SERVICE

Like an oasis of peace, Magoga is located in the square where the old fruit and vegetable market of Cartagena used to be. Inside you can breathe calm and feel the harmony that flows between the kitchen and the dining room.

A decoration inspired by the Carthaginian landscape also contributes to the feeling of tranquillity. Natural materials, ochre colours reminiscent of Roman ruins and fish murals invite you to enjoy the moment and disconnect from everyday life.

The exquisite service in the dining room takes care of the smallest of details to offer a unique gastronomic experience.

The work of Adrián de Marcos in the dining room, who guides and advises when needed, is the perfect counterpoint to Magoga’s culinary proposal

The art of cheese

Trained by Spain’s top cheese experts, Adrián and his team started out offering six cheeses and now present at each service around fifty of the 200 local, national and international varieties that pass through the restaurant every year.

Recognised in 2020 with the Q de Quesos award for the Best Cheese Menu in Restaurants, Adrián is already preparing his next step in this fascinating world: creating and experimenting with his own varieties.

A winery to dream

To enjoy all the nuances, textures and aromas of Magoga’s cuisine, there is no better company than that of a good wine. The pairing possibilities are almost endless, thanks to a wine cellar with more than 550 references carefully chosen by Adrián de Marcos.

Great wines from national and international wineries share the limelight with local gems and new finds from the best vintages. A treasure map drawn with the passion of a restless explorer, named Best Sommelier of the Region of Murcia in 2018.

A great connoisseur of his winery, Adrián understands each bottle as a poem full of nuances and stories, which he knows how to convey to offer an unforgettable journey.

Born in Fuente Álamo (1987), a town with a long tradition of agriculture and livestock farming in the Campo de Cartagena region, she remembers as if it were yesterday her grandmother cooking while she watched in fascination.

Her years of training at Karlos Arguiñano’s Aiala Catering School and the Basque Culinary Center allowed her to develop his full potential. Her talent in the kitchen became evident first at Arzak and then at El Bulli, where she learned the value of culinary tradition and avant-garde originality alongside the best chefs in the country.

Together with Adrián de Marcos she embarked on an adventure with Magoga, the project with which she has made her dreams come true. Inspired by the history of the city of Cartagena and her childhood experiences, her cuisine has been recognised with 1 Michelin Star and 2 Repsol Suns. María Gómez is no longer an up-and-coming chef, but a consolidated reality among the youngest chefs in the country.

Since he was a child, Adrián de Marcos (Madrid, 1987) has been closely linked to the world of gastronomy. At the age of ten he was already the unofficial cook in his house, and at 19 he took the definitive step when he discovered that Karlos Arguiñano had a Catering School. He presented immediately at AIALA headquarters in Zarautz, where his path crossed that of María Gómez. Since then, they have been inseparable.

After working in the kitchens of Zuberoa and Arzak, his first trial by fire, and working as head chef in several restaurants in Madrid, what he wanted most of all was to start his own adventure with María in Cartagena. Thus Magoga was born.

There, he soon saw the need to take a step forward, leave the kitchen and become maître and sommelier, living up to his motto: “you have to treat the customer with the same affection as a mother”. As a result of his constant learning, in recent years he has received awards such as the Best Sommelier Award in the Region of Murcia and the Q de Quesos Award for the Best Cheese Menu in a Restaurant.

This website uses cookies so that we can provide you with the best user experience possible. Cookie information is stored in your browser and performs functions such as recognising you when you return to our website and helping our team to understand which sections of the website you find most interesting and useful.

Strictly Necessary Cookie should be enabled at all times so that we can save your preferences for cookie settings.

If you disable this cookie, we will not be able to save your preferences. This means that every time you visit this website you will need to enable or disable cookies again.